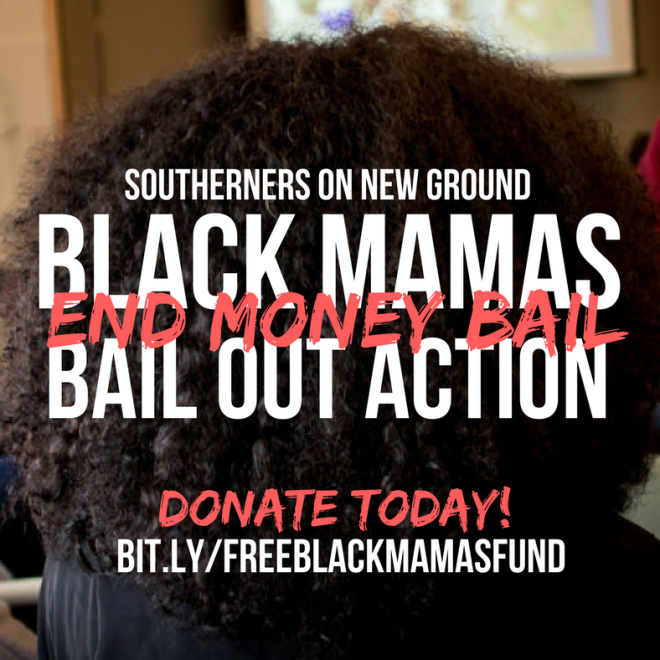 Did y’all follow the incredible Black Mama’s Bail Out campaign as it came to fruition last week? The Black Mama’s Bail Out action, which was a vision created by Mary Hooks, co-director of Southerners On New Ground (SONG), garnered national attention as activists across the country began to free incarcerated Black mama’s ahead of Mother’s Day. The women freed had been detained pre-trial, meaning they had not been convicted of a crime and only remained in jail because they could not afford to post bail.

Through following this campaign, I’ve learned some horrifying statistics: 70% of our country’s prison population are held in cages despite never having been convicted of a crime. 80% of incarcerated women are mothers. One in five transgender women have spent time in prison and one in three reported being sexually assaulted while there. Black people are 2.5 times more likely to be arrested than white people.

The charges brought before the women freed in Atlanta included jaywalking, cursing, urban camping (otherwise known as homelessness) and being unable to pay a $150 fine.

The more I learned about our country’s money bail system, the more I threw my deep support behind SONG’s campaign. My family donated to the bail fund and then began soliciting in-kind donations for the welcome home celebration that happened in Atlanta this past weekend. My 5-year-old helped me organize the donations as they came in and saw me leave for various fundraisers, so we started talking about the action and why it was necessary.

“Why are the mommies in jail?” he asked me, as I was writing down the donations that had been dropped off at our house that day.

“I don’t know all the reasons,” I responded. “But the only reason they are still in jail is because they don’t have the money to get out. And that’s not fair.”

“Are there daddies in prison, too?” he wondered.

“Yes, there are daddies in jail, honey.” I said.

“Well maybe we can help them next,” he offered. I gave him a squeeze and said I believed the organizers were dreaming up plans to help as many people as possible in the coming weeks.

The action really resonated with my son, as fairness and unfairness are really important concepts right now developmentally. We spent much of last week talking about the money bail system in ways I hoped he might understand. He really wanted to go to the welcome home celebration happening on Mother’s Day since he had helped me collect donations. And let’s be honest, what 5-year-old doesn’t love a party. On the way to the gathering, I told him SONG had freed 17 mommies.

“17?!” he exclaimed. “That’s a lot! And they get to celebrate Mother’s Day with their families, just like us!”

The party was amazing. The weather was perfect, there was a ton of food, flowers and music. My son spent most of the time in the kids area, which included a jumpy house, a popcorn and cotton candy station and a face painting area.

That night, as he was brushing his teeth, my son asked me, “mommy, are super heroes real?”

I responded, “hmm, well, not really. Humans don’t have super powers the way Spider-Man or Wonder Woman does.”

He looked at me and said, “but I think you’re kinda like a super hero.”

Surprised, I said, “why do you say that?”

“Because you helped free all those mommies from jail today.”

“Oh, honey. You’re right. The people who freed all those mommies are super heroes. We answered their call to help, but I didn’t free those mommies. The activists at Southerners On New Ground dreamed this up. They are my super heroes too.”

“I hope they free the daddies next!” he said as he climbed into bed.

“Me too,” I replied as I snuggled up to him.

Y’all. Participating in the Black Mama’s Bail Out action, even in a small way, was an incredible experience for my family. The bail fund is still accepting donations and I plan to stay in touch with SONG to learn how I can continue to support their brilliant organizing. I hope you do too.

Join 2,075 other followers
Follow A Striving Parent on WordPress.com