When my son was three, he like so many other little people, became fixated on the Disney movie Frozen. It was all he wanted to watch, the only music he wanted to listen to and he desperately wanted to dress up as Anna, one of the main characters from the film, for Halloween.

After some hand wringing and worrying, we bought him the Anna costume, which he ultimately didn’t like because it was scratchy against his skin. This would be the first of many moments when our son would challenge me and my husband to reconsider what clothing, behavior and toy selections we considered appropriate for boys and for girls and expand our thinking beyond traditional gender norms. It was a gift.

Over time, our son’s love of glitter, hair accessories and princesses has begun to fade. He’s now five and peer influence is certainly a factor at play. His younger sister, however, just turned three and is entering her own love affair for all things princess. Before now, she gravitated toward traditionally masculine toys and clothing. Over the summer, she started to prefer dresses, which proved problematic since she only had one. Then she saw an image of Cinderella on a pull-up and life has never been the same.

I find myself yet again struggling to accept my daughter’s delight in Cinderella and other princesses she’s been exposed to at friends houses and toy stores, but for completely different reasons. With my son, I worried about how the world would receive him; that he would be teased and hurt. With my daughter, I worry that she is falling into the traditional narrative spun for girls and I want to empower her to know she doesn’t need saving from any prince.

I know in both instances, my worries stem from my own life experiences and world views and it’s unfair to place that on my kids. The root of my children’s interest in princesses largely comes from the fabulous dresses, the magic and the catchy songs. Through more conversations with friends and family, I agreed I needed to support my daughter’s infatuation with princesses, but I continued to disrupt the problematic racist and sexist imagery. 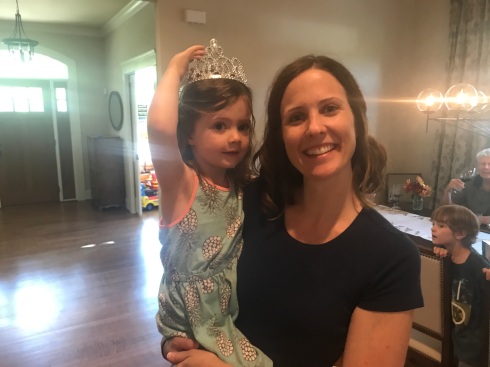 But just as there was a difference in how my daughter was received when she wanted to dress up like Darth Vader for Halloween vs. my son who wanted to go as Anna years before, there is also a huge difference in how her love of princesses is playing out.

For my son, many people I knew shared our worry for how he’d be received in public if he wore the Anna costume, fueling my own anxiety. Only immediately family gave him Frozen themed presents during the holidays and even then many of those gifts featured the male characters. For my daughter, however, she was just inundated with princess gear for her birthday. This bothers me and reinforces that while I should support her interests, I need to stay vigilant in order to make sure she’s exposed to other toys and narratives.

I must admit, however, I find myself giving my kids extra encouragement in the moments they choose to step outside of their traditional gender norms. I do this to counter act the messages they are receiving at school, on TV and in the world. It’s a tough balance to strike and I’m sure I don’t always get it right. I just cringe knowing how much influence our society has on kids.

My hope for my children, and all children for that matter, is that they feel supported throughout their journey in discovering who they are and that they feel loved no matter what. I hope we can smash the gender binary and help our kids feel empowered to make choices regardless of their assigned gender at birth. I hope more parents can stretch and grow beyond what they were falsely taught about boys and girls growing up in order to better support all kids, whether they are their own or not.

How do you handle gender norms with your kids? I’d love to hear some of your strategies below.