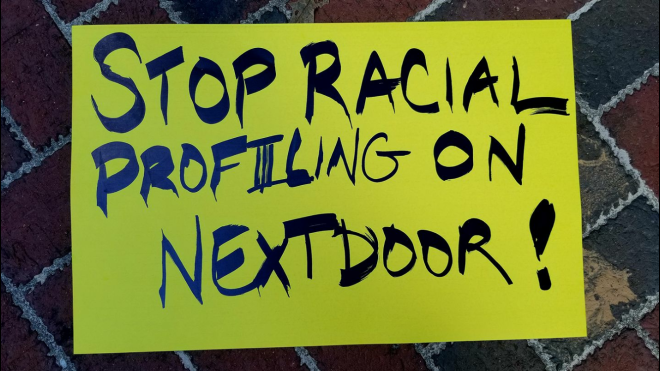 My neighborhood, like so many across the country, has a racial profiling problem on our online community forums. I live in a predominately white, affluent community in Atlanta, Georgia comprised of nearly 8,000 residents. Despite our reputation as a liberal enclave, on Nextdoor, a social media site that purports to connect neighbors, people of color are criminalized on a nearly daily basis while white people are extended compassion and understanding.

Neighbors share “be on the look out” posts when Black transients are seen in our neighborhood, while a white transient is fiercely protected — a beloved fixture in our community, actually.

People share security videos of unkempt Black people opening Amazon packages and call for “locking up those thugs!” Similar videos of white people stealing patio furniture and decor are met with concern over their mental well-being.

When a white neighbor was caught defacing political yard signs and sidewalks with swastikas during the 2016 election, our Nextdoor leads urged everyone to not share the person’s picture, arguing that s/he clearly suffered from mental illness. On the other hand, circulating grainy photos of Black and Brown perpetrators is common practice.

Our neighborhood serves as a reminder that voting Democrat does not absolve us of racism.

A few weeks ago, a Black neighbor was taking her out-of-town guest on a walking tour of our community, glass of wine in hand, when she was accosted by a White neighbor who plied her with questions and accused her of not belonging in our neighborhood. After a tense exchange, the White neighbor exasperatedly said, “you’re Black! Black people don’t live here.”

Our Black neighbor was brave enough to share the experience on Nextdoor, and she included the name of the perpetrator. Her post was met with some compassion, but the conversation quickly devolved into accusations against my Black neighbor yet again. This time, Nextdoor users felt she was creating a “witch hunt” against the White neighbor, who was deemed unwell and deserving of better treatment.

A few neighbors and I who had previously corresponded about the various racist incidents in our community decided to reach out to our Black neighbor and hold an emergency meeting to see what support she and her family needed. We kept the gathering small to ensure a safe space.

Nine of us came together that night, including the woman’s husband and 10-year-old son. We heard her account first-hand, encouraged her to file a restraining order against the neighbor, who had also verbally harassed another neighbor of color, and collectively decided we needed a public response to the incident.

Every year, our neighborhood sponsors an artisan street market and festival called Summerfest. It’s a community fundraiser and is always well-attended. To kick off the weekend, there is a family parade for residents. One of our neighbors made the brilliant suggestion that we join the parade and hold signs protesting the racial profiling and racism in our community. We wanted to send the message that people of color, including children, live in the neighborhood too and deserve to feel safe.

All in all, there were about 35 adults and kids who participated in the action. Despite our size, many folks in our group felt nervous. Some had never protested anything before. Some were worried how their friends and neighbors would react. But no one backed out.

We made a last-minute decision to let the parade start and bring up the rear. We hid our signs up until that point and then began to walk together. People lined the streets of the route, and many cheered as they read our signs, which held statements such as “Stop Racial Profiling on Nextdoor” and “Kids of Color Live Here Too.” Other people rolled their eyes or were visibly annoyed.

A couple of White women questioned if this was the appropriate venue for protest and wondered why we “singled” out our neighborhood when racial profiling happens everywhere. Some people were confused about why we were protesting in the first place and we were able to have productive dialogue with them. We had a few folks ask if they could join us. And, as expected, we met with some anger and straight-up ignorance from a couple of couple neighbors. One person made sure we knew that “I care more about the trees in our neighborhood than I do about you!”

The parade only lasted 15–20 minutes, but we covered a lot of ground, figuratively speaking. Our kids were by our side the entire time, which was both a strength and a challenge. Many of the kids were tired and melting down in their strollers. The parade didn’t start until 7, which was bedtime for most of our crew, so we were on borrowed time for the duration of the action. I handed out emergency lollipops and we tried to make the experience as fun as possible for the kids while being honest about what we were doing and why.

Our goal to raise awareness was achieved. Our goal to show our support and solidarity with our Black neighbor and with all people of color in our community was achieved. One neighbor of color said she finally felt like she was building community in a neighborhood she had never felt welcome in. My kids see pictures from the parade and talk about the protest and helping to make sure Black and Brown people feel safe here too.

Now, the original group who gathered to support our neighbor is organizing. We’re in touch with Neighbors for Racial Justice, a group from Oakland, California that has been instrumental in pushing Nextdoor to address issues of racial profiling on their platform. We created a Facebook page. We are strategizing about how to influence our neighborhood civic association and Nextdoor, both of which are run entirely by white people, to make sure issues of equity and race are considered. We are reaching out selectively to neighbors to try to grow our numbers.

A version of this piece was originally published on EmbraceRace.