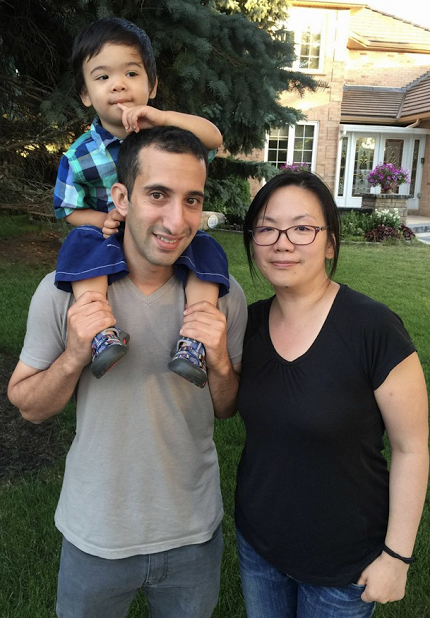 Whew. It’s been a hell of a 10 days since the inauguration, am I right? I need to take a deep breath, slow down a little bit and get refocused. Whenever I feel overwhelmed or find I’m losing hope, it always helps me to remember how many people around our country have been and continue to fight for justice and that many of these folks are fellow parents. I draw inspiration to act through hearing how other parents cultivate their power or focus their energies to make the world a more just place for all of our children.

I’m so very excited to lift up the work of Ari Paul, our latest Parents Who Inspire. Ari is an editor and a freelance journalist whose writing has been been featured in The Nation, The Guardian, Forward and more. Ari has withstood targeted harassment by neo-nazis and white nationalists yet continues to use his voice and his platform to advocate for multiculturalism and justice in its varied forms. Let’s get to know him!

Tell us a bit about yourself:

My name is Ari Paul, and I’m the editor of a newspaper called Clarion, published by the faculty and staff union of the City University of New York, and, in addition, I’m a freelance writer. I live with my wife and two-and-half-year old son in New York City.

As a parent, what’s your favorite part about living in your city?

As much as New York City changes, in good ways and bad ways, it’s still extremely international. In fact, my neighborhood is said to be one of the nation’s most linguistically diverse zip codes in the nation. And so it many ways it’s still a place where you can be somewhere and meet people whose lives intersect with all corners of the globe. I like that the other parents I see on the playground come from all different places. I’m glad that my son gets exposed to that early.

In what ways are you civically engaged with your local or national community, either professionally, personally or both? Feel free to include links to organizations, events, etc.

I’ve been a member of Democratic Socialists of America, and over the years have been an activist in various labor unions, including UNITE HERE and AFSCME. Locally, I try to stay involved in pretty bread-and-butter issues, such as access to housing, proper application of public services and keeping an eye on public safety and policing. And in other ways, people are coming together in sort of nascent new communities. We just came off a weekend of mobilizing against the Trump administration’s so-called Muslim ban. Whatever type of organization that becomes, I’ll be a part of that, too.

Professionally, I’m connected to the struggle to maintain public higher education in New York City and elsewhere, and related struggles of protecting immigrant students, making access to college affordable and protecting academic freedom. And in my own writing I’ve been documenting the rise of racial extremism.

What’s your favorite part of your civic engagement activities?

I think that even in a big city like New York City, it’s easy to feel like you’re alone. When you have economic problems, housing issues etc., you see yourself as this lone, helpless victim. When you come around and see people who are going through similar experiences, on the one hand, it makes real organizing possible, but it also gives you a sense of solidarity.

What inspires you to engage in these activities?

To be perfectly honest, I’m very much motivated by what a dire situation we’re in. Housing is more expensive. Jobs are hard to find and wages remain stagnant. What’s left of the social safety net is being undone. The climate of racist anger is alarming. A lot of changes are happening very quickly, and it’s hard to keep up, but I really feel there’s no other option than to engage.

Any words of wisdom for parents wanting to create space for civic engagement in their own busy lives?

It’s hard, because between working and all the issues related to parenting, it’s like you never have any time. But that can also force you to be more strategic and tactical, forcing you to not engage in time-wasting activities or campaigns that are disorganized or don’t fully seem worth the effort. You have to pick your battles, in a sense.

I also think one should know one’s own limits to help you focus: Don’t try to be a whirlwind of activism in this cause or that—instead, find out what your good at (media outreach, translation, political organizing etc.) and hone that. And, realize that you can’t be everywhere, and know that you can act with your dollars, no matter how small. Can’t be at JFK the night the Muslim ban goes into effect? Give to the ACLU, instead.

Ari’s writing and social media presence inspire me greatly. I particularly appreciate Ari’s final point, which is parents must be strategic around how and when we engage due to the limitations raising little humans creates. I can become scattered in a million different directions very quickly, so I appreciate his encouragement to be flexible and creative in the ways I support the many causes deserving attention in this moment.

Ari has a powerful voice and I definitely recommend you follow him on Twitter and Facebook. I’m inspired by his bravery and commitment to engage, despite the threats and hate he receives. Ari reminds me that activism can and should take many forms. We all must find a sustainable way to resist all that’s coming down the pipeline.