This past weekend we took our children to see Santa Claus at the Botanical Gardens in Atlanta, Georgia. As we were preparing to leave the house, I told my 2-year-old I needed to pin back her hair so she could see. My 4-year-old son ran over and asked to wear barrettes in his hair too. “I want to dress up for Santa!” he exclaimed.

My son has enjoyed sporting hair accessories ever since my daughter started to wear them. I even remember him asking to wear one of my headbands when he was one. It’s been a process, and we’ve made mistakes along the way, but my husband and I let our children self-express as they choose, even when those choices are outside of traditional gender norms.

I’ve taken my son to get his nails painted. My daughter dressed as Darth Vader for Halloween. My son sometimes wears his hair in ponytails and barrettes. We never say actions, clothing or toys are designated for boys or for girls and we see the fluidity in their play.

We are not raising our children without gender and they ascribe to many traditional gender norms. But as parents, we are purposefully expansive and do not stifle the moments our children play and dress beyond what is considered typical for their gender.

As usual, my son had a specific vision in mind for his hair. Rarely does he want just one pony tail or one barrette. On this particular day, he requested two clips on the right side and one clip on the left. He ran to look in the mirror, gasped and said “I love it!” as he stared at his reflection.

Unfortunately, my son has been called weird and told he looks like a girl by his peers in the past. Now when he chooses to wear hair accessories, we always have a quick pep talk about our family values and what other kids might say.

“I love your hair, too!” I told him. “Some people think barrettes and ponytails are just for girls. We don’t believe that in our house, though, do we? What would you say if a person told you barrettes are for girls?”

“I’d say, ‘that’s not true and not very nice,'” he replied. “I can wear barrettes if I want to!” The more we role play and practice, the more confident my son becomes in his responses. Our goal is to provide him with a bit of armor should he have another negative encounter with a child or adult. We high-fived each other and headed for the door.

Our family was the first in line for Santa, and my son patiently munched on some crackers as we waited. I explained to our kids what would happen next: they’d have the choice to sit on Santa’s lap and he’d ask them what they’d like for Christmas. When Santa entered the atrium, it was clear my daughter was fully freaked out, so my husband stayed with her while I took my son up to Santa’s chair.

My son got very shy, as he often does with new people, and Santa asked him if he’d like to sit in his lap. My son nodded and climbed into his lap, but wouldn’t make eye contact. Santa asked him what he wanted for Christmas, and my son looked at me, tongue-tied in the moment.

Santa said, very tenderly, “do you like princesses and baby dolls? Is that what you’d like?” Uh oh, I thought. Here we go. Before I could even react, my son snapped out of his trance and said, “No, I’d like a train.”

Santa didn’t bat an eye, and said he thought that sounded reasonable and maybe he’d have a few other surprises too. Phew. I took a picture and our time with Santa ended.

My son actually does love princesses, but for whatever reason has never taken to dolls. It was fascinating to me that Santa clearly interpreted my son and his barrettes in a certain way. He made an assumption about the type of toys my son might like based on his hair accessories and perhaps his shy demeanor.

While this bothers me on some level, I also found their interaction to be very sweet. Santa really seemed to try and connect with my son and engage him without judgement. My son in turn responded in a way that was authentic to himself. As we left the gardens, I couldn’t help but wonder what Santa made of the little boy with barrettes in his hair who wanted a train.

The following day, I ran across this comic: 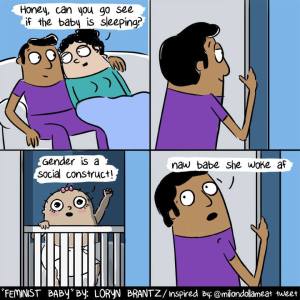 I love this so much. Gender IS a social construct. The restrictions we place around boys and girls from the moment their sex is assigned in utero are ridiculous and ultimately oppressive.

I am so appreciative that I have little people in my life who exemplify that with space and opportunity, their likes and dislikes and creative expression stretch beyond traditional gender norms. My son, in particular, teaches me again and again that there truly isn’t one way to behave or dress like a boy or like a girl and any attempt to constrain him based on what society deems gender appropriate can cause harm.

Perhaps my son taught Santa a little something about gender norms too.