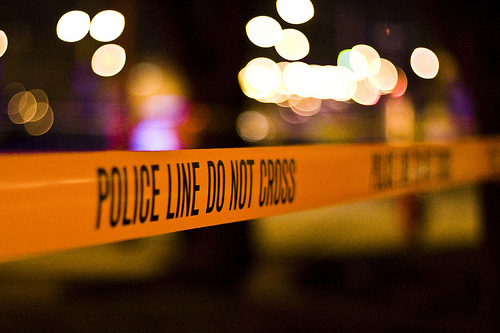 Recently, I was driving to pick up my son from school and was stopped at a major intersection in Atlanta, where cars travel at ridiculously high speeds for a non-highway thoroughfare. I noticed a man, who happened to be black, standing precariously on the side of the road reaching for something on the ground. His appearance was unkempt, so I assumed he was homeless, and his stumbling and swaying indicated to me that he was intoxicated. As the light turned green, I was shocked to watch him enter into the cross walk and stumble into oncoming traffic. I braced myself because I truly believed I was going to witness this man get hit by one of the cars that were beginning to fly through the intersection. Amazingly, albeit narrowly, he avoided any collision and made it safely to the other side of the road.

Sighing a breath of relief, I went on to pick up my son thinking the incident was over. We were stopped at the same intersection heading home and the man in question was still on the side of the road I had last seen him. As the light turned green, he again walked into oncoming traffic, this time pounding on a window of one the cars trying to avoid hitting him. Fearing for his safety and the safety of the passengers in cars, I made the impulse decision to call the police.

“There is a gentleman walking into oncoming traffic at the intersection of Ponce de Leon Avenue and Monroe Avenue. I’ve witnessed him do this twice now. He appears intoxicated.”

The dispatcher asked me to name his race, but I made sure to include other relevant descriptors like what he was wearing, as he had a bright blue shirt wrapped around his head and purple pants. I had recently read a deeply disturbing blog post written by an African-American professor, Steve Locke, who was stopped by the police because he “fit the description” of a perpetrator, so I was intentional in giving as much description as possible to avoid another black person being mistakenly stopped. She then asked for my phone number and the call was over.

After I hung up, I felt a surge of adrenaline followed by fear, mixed with regret. Was calling the police the right thing to do in this situation? I hadn’t called the police in years. The last time was in my 20s when my sister and I found an unconscious man, who happened to be white, passed out on the side of the road on our way home from a bar late at night. Similar to the above situation, I called the police so this man could receive help. Being that my sister and I were young and unattached, we were able to stay with him until paramedics arrived.

To be clear, I am not anti-cop. On the contrary, I have an enormous amount of respect for authority and personally, I have only had positive encounters with police officers. My own worldview, however, does not negate the fact that serious reform is needed nationwide in how policing happens, especially within low-income, communities of color. Police officers are rarely held accountable for their actions. I know this to be true after watching a slew of non-indictments in citizen deaths at the hands of police in 2015 alone.

A week or so after I called the police, Quintonio LeGrier, a 19-year-old teenager having a mental health crisis in Chicago, was killed by police. His father called the police for assistance in subduing him and Quintonio, as well as his downstairs neighbor who was asked to keep an eye out for the arriving cops, were tragically shot by the responding officers. Reading the story, I was reminded that earlier in 2015, Anthony Hill, was similarly killed by officers here in Atlanta. The police were called by Hill’s neighbors because he was having a mental health episode and he was shot while naked and unarmed. Activist and journalist, Shaun King, published an article last week on the alarming number of people who are shot by police responding to a mental health crisis. A study reported that 25% of the people killed by police last year suffered from mental illness. Then, a Facebook friend posted an article that was written in 2014, but felt oh so relevant, entitled, “A New Year’s Resolution: Don’t Call the Police“. The piece makes the case for why calling the cops should be a last resort.

Taking all of the above information into consideration, I regret notifying the police. Yes, I was well-intentioned and genuinely wanted to help this man and prevent an accident, but statistics show that police are ill-equipped to handle individuals with mental instabilities or who are under the influence and it appeared this man was not in a normal state of mind.

Moving forward, I will only call the police for the following reasons:

-I am in imminent danger of being harmed.

-I am the victim of a crime.

-Someone else is in danger and I can remain on the scene.

-I am a witness to a crime and I can remain on the scene.

If it’s safe, remaining on the scene feels crucial because I can bear witness to all that transpires. Professor Locke mentions in his post how important it was for a bystander to stick around during his wrongful police detainment and eye-witnesses for Anthony Hill and other victims who are shot by officers help build a case for indictment. This is obviously not a full-proof guarantee for justice, as the Michael Brown, Tamir Rice, Eric Garner and other recent non-indictments show, but at the very least it’s a start.

For all other situations, I am going to press pause on calling the police and purposely not follow my neighborhood’s problematic mantra of “see something, say something”, which translates to “call the police anytime you feel uncomfortable”, and ultimately means, “racially profile at will”. Calling the police has not been a regular occurrence in my life, but now more than ever I need to react accordingly to our imperfect system. I need to understand that when I call the police, especially on behalf of or about a black or brown person, I am putting those individuals at risk. I need to feel confident that the situation warrants notifying the cops and if I have any hesitation, history and statistics show I’d be better served to find an alternative solution.

What’s your take on calling the police? Do you agree with my stance? I’d love to hear your feedback below.

2 thoughts on “Thinking twice before calling the cops”